In August 2014 I found out a lot about myself, my soul, God, The Heavens, my life, and My Art. I've been creating artwork since childhood. Simple designs, nature elements, and strange symbols. Then I discovered what they all meant and the meanings behind those designs became more understood. Now I'm going to reveal them to the world. 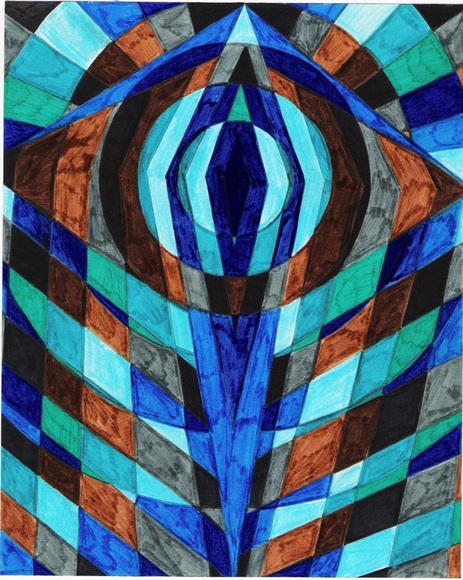 I sat down in the summer of 2012 (shortly before I decided to become baptized) and genuinely wanted to create something for God. What came from me was from above. An art Series emerged (founded mostly around the Cross Structure and the Eternal Circle) and blossomed into an actual STORY. What I ended up creating was how God created Jesus and Jesus lived out His life. It was done in far more of a Spiritually Abstracted way.

God has long since been represented by the EYE throughout history. God sees, knows, and understands ALL. This art piece shows God and the Cross-Trinity creating Earth which is represented by Blues (Ocean) and Browns (Land). The blending and unity show Earth Came from God and is a Part of Him. 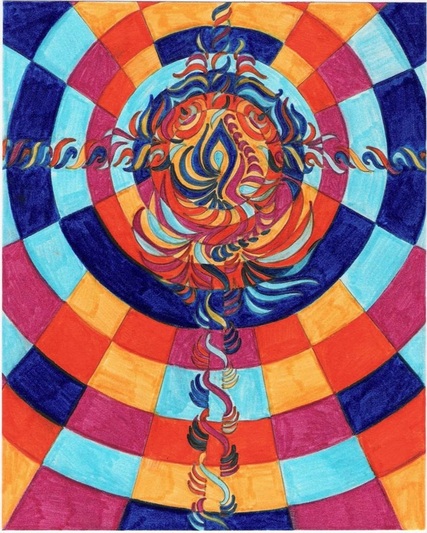 I’m not sure why I was meant to draw God’s staff, but here it is. It shows the complexity of spiritual "objects" in Heaven -having both transparent and tangible qualities to it simultaneously. 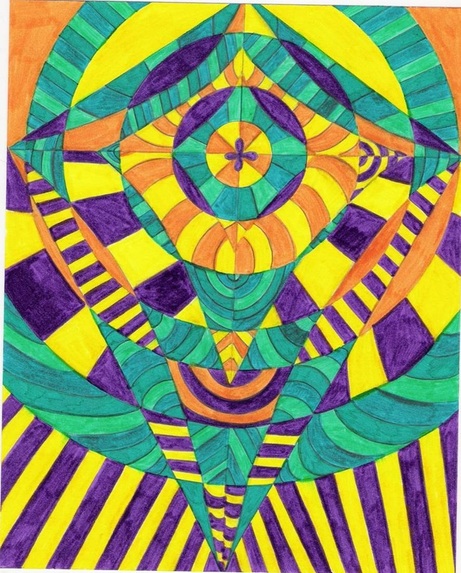 Heaven is governed by Principles that are represented in Geometry and Mathematics. Balance, Equality, Addition, Time, Paralleling… and most importantly SYMMETRY. Symmetry helps keep “balance” in the Universe. There is something like a “machine” in Heaven that keeps track of Time and Symmetry, like the inner workings of a watch. 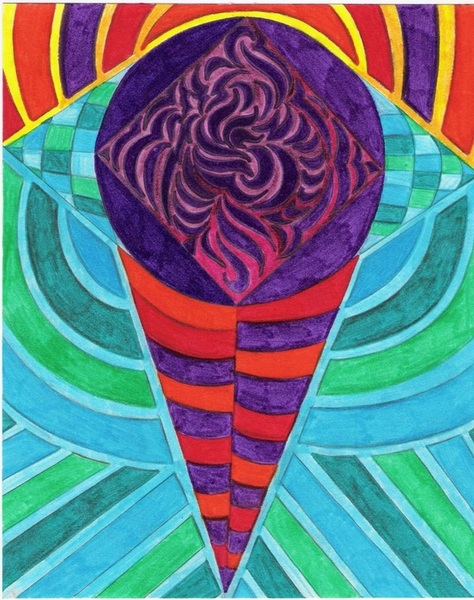 Name: “Jesus Being Born from God and Sent to Earth”

When God "created" Jesus, He took a piece of Himself and sent it down into flesh. God is the “Eye” center within the Trinity/Cross. A dawn-like a sunrise crowns above to mark the Beginning of the Birth and blue and turquoise waves of Grace flow under like water. Purple is the color most associated with Heaven and Jesus is in the Center of the “God Eye” as He is sent down the Trinity structure to Earth. 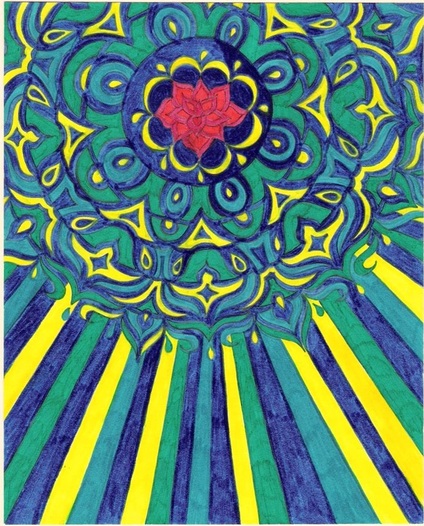 This was one of my favorite pieces to come out of this series. The Blessed Mother Mary always represents unconditional love to all. For some reason many Saints and Blessed Figures I have drawn in design are often represented by The ROSE. Mary is shown with the Rose-center, emulating love and light from above in deep blue. Grace flows from her like sacred waters and showers all of Earth from above. 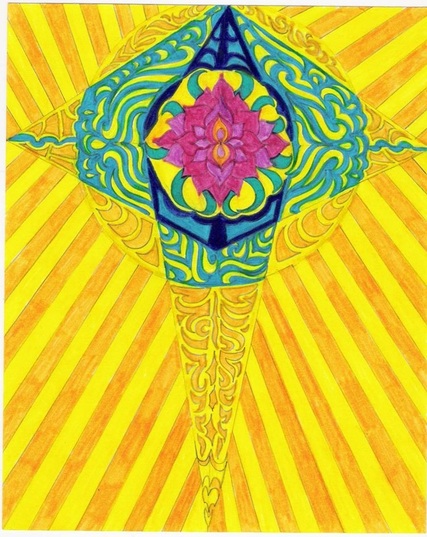 Name: “The Birth of Jesus”

This was actually the first piece in the series to be made-which kind of makes sense. I didn’t know what it “was” other than my attempt and alluding to God from the Trinity/Cross Structure and the Sphere/Eternal Circle. Everything else just kind of “came about”. Jesus is represented by the Rose, like the Blessed Mother Mary and many Saints I have drawn have been. He is still found in the center of the God’s Eye Trinity and is surrounded by Divine lights of Yellow and Gold and the Blue waters of Grace. 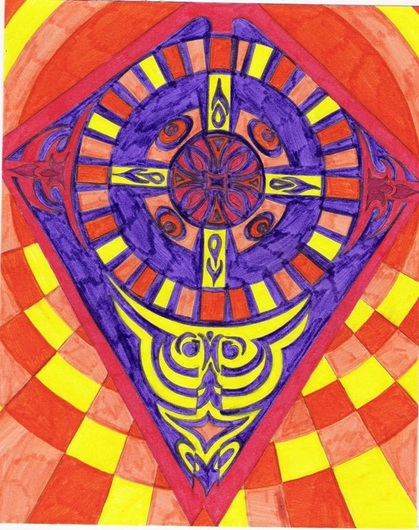 Name: “Jesus in Body over Time”

Red, Purple Orange. Red for the Compassion and Love He has for people. Purple the color most associated with Heaven. Orange the color most associated the Jesus (the Son like the sun warm and bright). The Yellow skeletal body structure below the Giant wheel of time to show how frail and human His body was on Earth, though He also grew with Balance, Symmetry, and Grace. 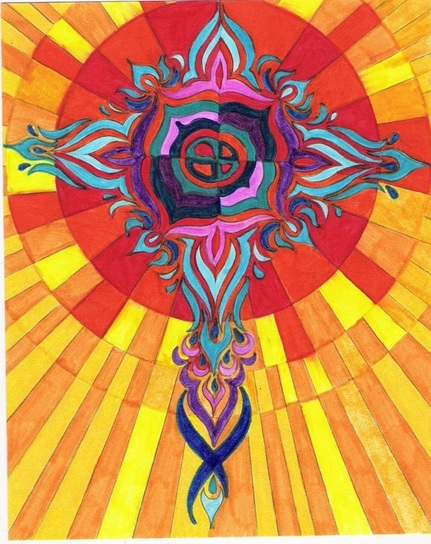 Name: “Jesus in Spirit on Earth”

Purple divinity of Heaven at the core of His being stretching out to the lighter blues of Grace. Encircled by the Compassionate Love of God and the rays of the sun like His own radiance. This was the “soul” of Jesus while on Earth. 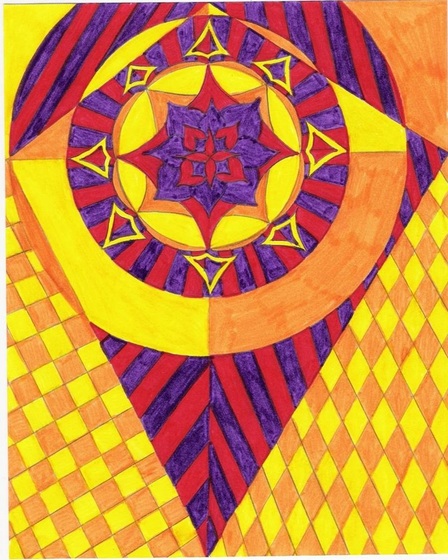 With the Compassion and Love of God (represented by Red and Purple), Jesus begins to connect to a few select people over time that He gives the Golden light of Divinity to. This in turn begins to be witnessed by a few groups of people. 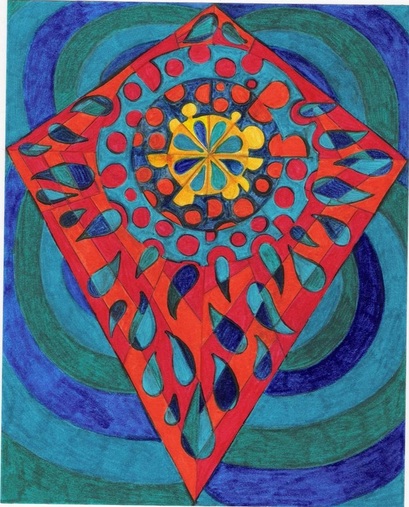 This was a painful one to make. As it was happening I was being made aware what each part represented and could feel the heaviness associated with it. At the Heart Center of Jesus’ Spiritual Being remained the Golden Light of God and Grace. Then from there came His Spirit’s Understanding of His Pain, rather than the pain itself. Then in His body, Violent Red and Tears of Grace wept as He was torn into. But under it ALL and surrounding it ALL were the waters of Grace that ultimately covered and saved Him. 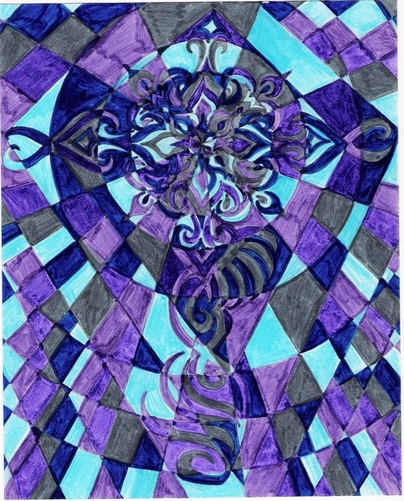 This shows the Spirit of Jesus in Death. Grays and dark tones denote the state of mourning that echoed out. But there is also the blue waters of Grace. Even in His death He was still surrounded by and IN a state of Grace. 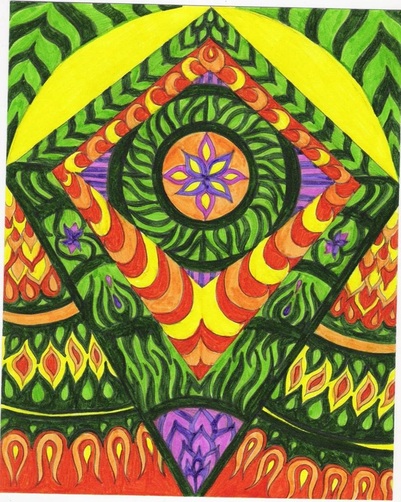 When Jesus went into Hell He was like a Rose among Flame. He did NOT burn or suffer. Instead He added Grace and Order to Hell, and took ALL of the suffering people in Hell and Rose them to Heaven with Him. Having suffered all the pains of the world, He could Forgive all the pains those in Hell had inflicted, and by His Grace they received the Grace of God. 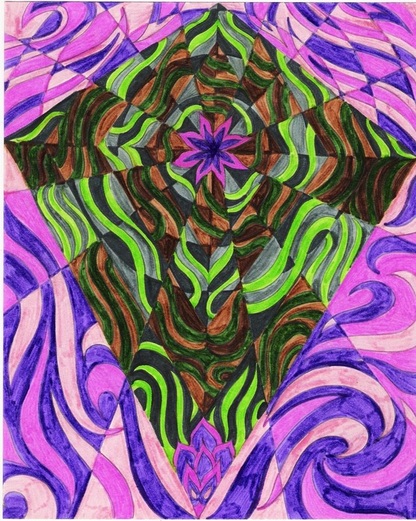 After His death and going to Hell, Jesus took All of the people from there with Him and they Rose to Heaven with God’s Grace. Jesus in Heaven brought with Him the experiences of Earth, and Heaven’s Grace could not blend with it, but instead reached out to the Rose/Heart of His Being PAST the pains and memories of His experiences on Earth. In doing so, Jesus was Renewed. His Spirit grew out and reconnected to Heaven’s Grace. 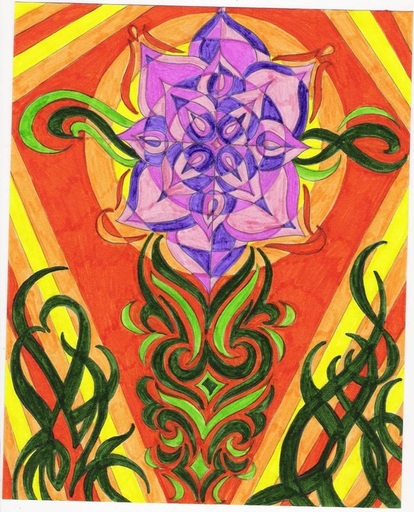 When Jesus returned from heaven back into His body He Arose like a flower in full bloom, full of even more Grace and Love. He spread the Heaven within Him and unto the world around Him. He was fulfilled and gave fulfillment to others from His being. 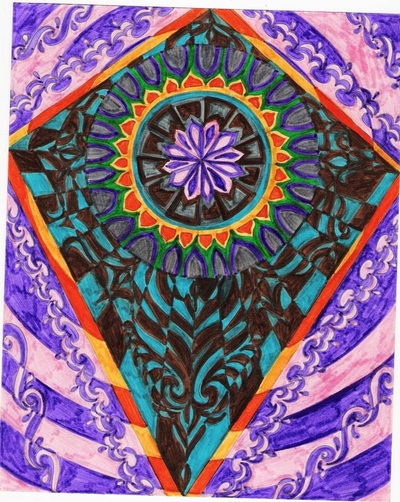 After His resurrection, Jesus led His disciples to meet people of different lands and spread the Grace of God. The circles of influence from this group then led to more and more people spreading God’s grace outward. At some point, the Grace passed so swiftly that it echoed out beyond them, and reached out to places and people they did not meet in person. And so it was that Jesus become the drop in the center that rippled out and spread the waters of Grace to All Humanity. 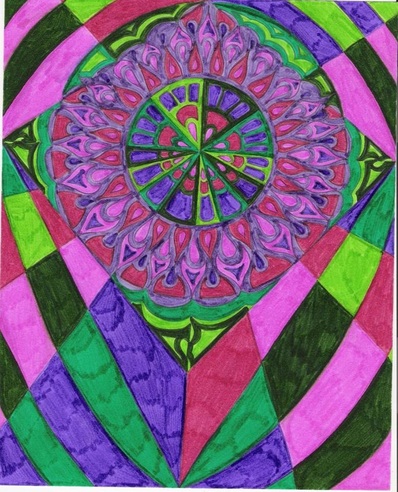 Jesus was the flower that blossomed and gave Love and Grace from God to people. The first Churches in kind were like the flowers of Christ echoing His message to ALL. The center of the image is like a rose but also like a cathedral with its stained glass windows. Like a flower it is a living being, not just a structure, concept, or institution. It grows with its members and blooms when they spread the Love and Grace of God out into the surrounding world. 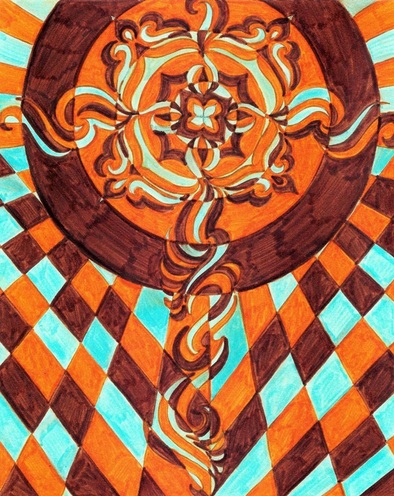 Jesus didn’t die the second time the same way as the first. Out of love for Him, God rose Jesus Spirit from His body without the pains of dying. Jesus then arose to Heaven. 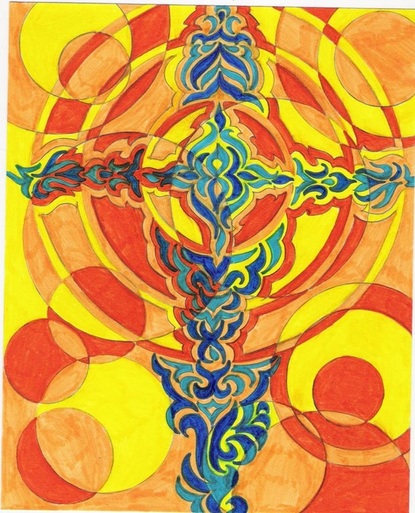 Name: “Grace of The Son”

Jesus rose from His body in His final death into Heaven and was full of Grace and surrounded by Light. Then He became Fulfilled (as shown in the next piece in the series 19 of 22). 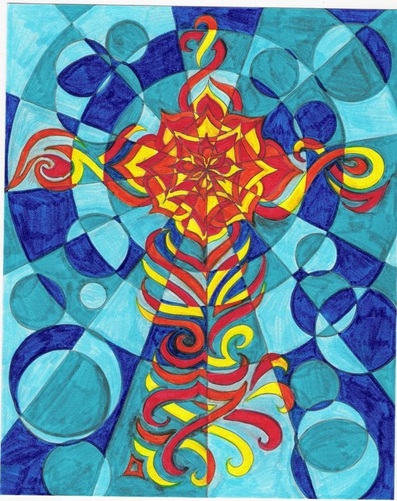 The Grace in Jesus emulated out in Heaven like a pool of water. It echoed from Him and as it did He was filled and fulfilled in His Divinity. His “human self” was washed away and He became MORE and was Restored and Renewed to His former state –but far more Glorified. 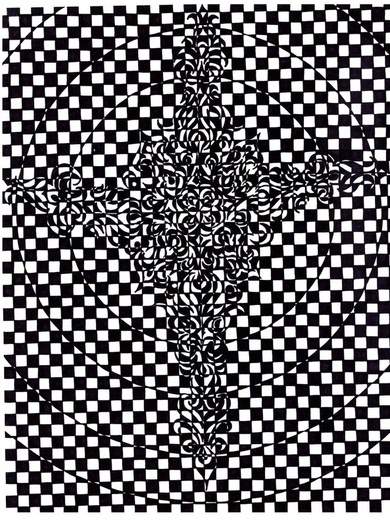 After everything He experienced Jesus was filled with Full understanding of LIFE. Both the Darkness and the Light. And He could see the TRUTH in ALL. And the Truth was in Him and He is the Truth. 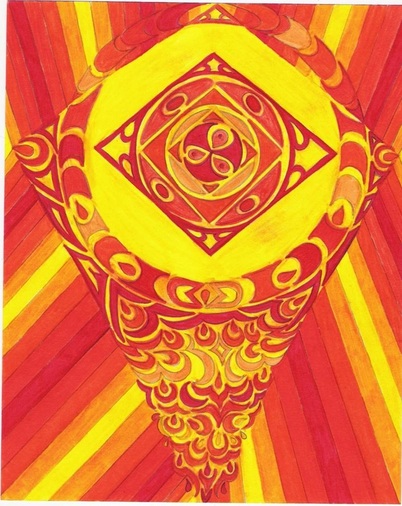 After Jesus came, Hell became Tiered –whereas before it had been one big pit ALL people could be dragged into. Hell after Jesus became “ordered” and appeared as an upside-down pyramid structure. It’s Square to mock God’s eternal circle was then blended in part with God’s Divinity for it could not entirely escape since ALL comes from God. 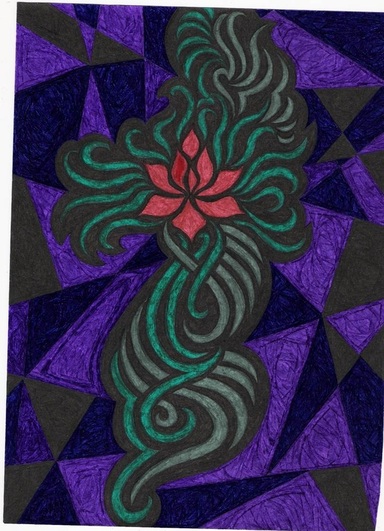 Maybe as a way of giving thanks for the work I’ve done and the creation of the art series, I drew an image of a rose in front of something that seemed like a stained-glass window. It was then explained to me by the Holy Spirit that this is my death. I am the rose, the black represents Death, and the purple represents Heaven, and the blue represents Grace. There will be mourning for my death, but it will also be beautiful and full of Grace. I thank God for my life and look forward to being in Union with Him forever in Heaven after I leave this Earth.